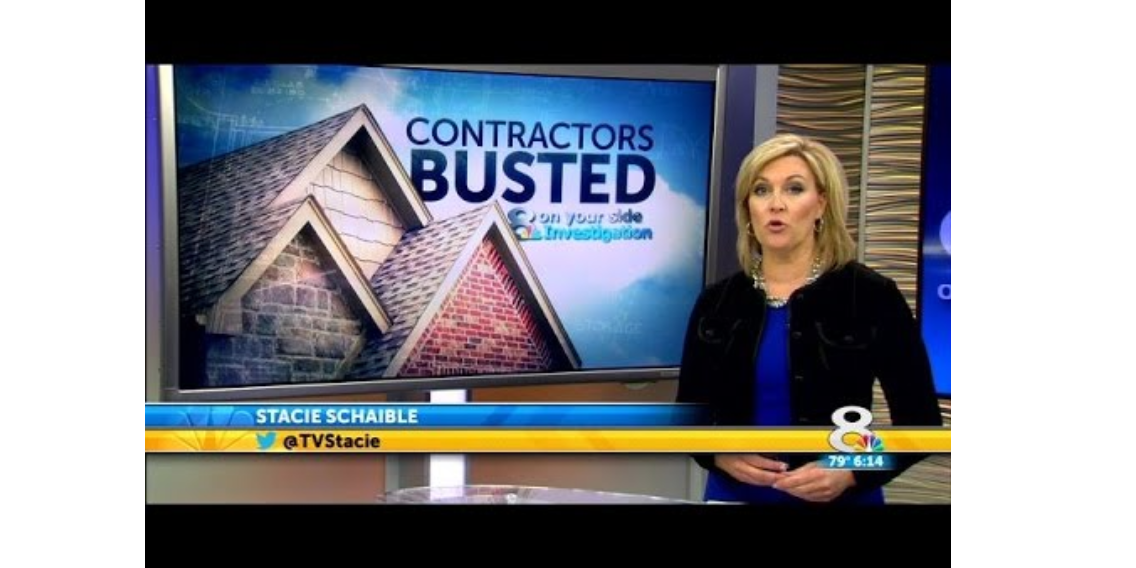 The very next morning following a large hail storm, Mrs. Johnson was approached in her driveway by a young man in shorts and ballcap, claiming to be a roofer from her area, offering free roof inspections. Confirming that the inspection was free, she allowed the young man to climb her roof and check it out.

The young man returned a short while later, showed her a few pictures of some damages to her roof and recommended that a claim be filed with her insurance company. He tells her that it is very important that he is present for the inspection with the adjuster to ensure that all the damages are accounted for and that the claim is paid correctly.

He agrees to meet with the adjuster, Free of Charge, “If” the customer signs a contingency agreement that stated the following:

• Inspect and document the damage caused by the storm.

• Meet and deal directly with my insurance company, adjusters, and mortgage companies

• Obtain an “Agreed Price” approval from my insurance company and expedite the processing of all paperwork.

Upon the approval and release of funds from my/our insurance company, I/we will execute a written contract with XYZ Roofing & General Contracting for the repairs and/or replacement specified by my insurance company for a price equal to but not exceeding the full amount of my insurance proceeds.

I understand that there are no charges for these services other than the awarding of the contract, and I/we hereby agree to award the contract to XYZ Roofing & General Contracting upon approval from my insurance company.

This agreement is only contingent upon the approval of my/our insurance company. As a means of clarification, Contingent means; if there is no approval by my/our insurance company, there is no contract. I am also aware that my out of pocket expense will not exceed my deductible amount, unless specifically authorized by me/us in writing (subsequent contract or change order).

He asked the young man if there was any catch to this agreement in any way. The young man assures Mr. Johnson that everything is on the up and up. So, both Mr. & Mrs. Johnson agree to file the claim and allow the young man and his employer to represent them during the inspection.

The claim was filed and the inspection took place 2 days later. After the inspection the adjuster told Mr. & Mrs. Johnson that he would release their check payment to them within 7 business days. He asked if the young man had supplied them with an estimate of his own so he could get a copy for his records. They explained that he had not provided them with an estimate but had agreed to work for the insurance proceeds.

The Roofing Agent Refused To Give A True Estimate

Before leaving, the adjuster recommended that they get a few written estimates for comparison, so after the adjuster left, Mr. & Mrs. Johnson then asked the young man if he had an idea of what the costs were going to be for all the work. He replied, no Mr. Johnson, our estimate is “what ever your insurance company pays”.

Mr. & Mrs. Johnson said ok and told the young man they would be in contact with him after receiving the documentation from their insurance company. Later that evening Mr. Johnson began to have second thoughts. Realizing he had not seen an actual estimate from the young man or his employer, he began to have anxiety and buyer’s remorse. How much are they really charging? What if I am being scammed, he thought.

The next day, he called around looking to receive written estimates from other local roofing companies to compare to his insurance estimate. Three separate roofing companies visited the property the next day and not one contractor was willing to provide him with a written estimate disclosing their actual costs. They all wanted to handle his claim on his behalf, for “what ever the insurance company pays”.

It was then that Mr. Johnson began to put it all together. They don’t want to give written estimates because they don’t want to leave any money on the table. They want all of the insurance money.

Mr. Johnson realized that the real scam, right from the beginning, was getting he and his wife interested in having someone “meet with his insurance adjuster”. This prevented he and wife from even thinking about asking for an estimate.

Mr. Johnson then called the young man and explained that he was no longer comfortable with the agreement and demanded that he give them a written estimate or he would have to find another contractor.

The young man, who had been extremely nice up to this point, immediately began to scream and cuss at Mr. Johnson over the phone, threatening to sue Mr. Johnson in a court of law. The young man then hung up the phone and had his employer call Mr. Johnson to discuss.

This was very shocking to Mr. Johnson. He had no idea the kind of person that he had been dealing with the entire time. One minute later, Mr. Johnson received a call from the owner of XYZ roofing and general contracting, wanting to know why Mr. Johnson had changed his mind. After explaining that he was not comfortable moving forward without knowing what their actual costs were, the company owner himself again threatened to sue him, claiming that Mr. Johnson had already signed an agreement giving them the job for the cost of the insurance proceeds. Not even the owner was willing to listen to his reasoning as to why he was having second thoughts.

Not one to be pushed around, Mr. Johnson immediately called his grandson, who just happened to be in the process of graduating law school. He sent his grandson a copy of the contingency agreement and explained everything that had happened from day one, in detail.

Being Sued by the Roofing Company

The following day, just as promised, Mr. & Mrs. Johnson received a certified letter that they were indeed being sued by XYZ Roofing.

Mr. Johnson sent the letter to his grandson and asked for advice on how to handle it. Mr. Johnsons grandson stated that he would handle everything on his behalf and assured him that he had nothing to worry about.

Since 2003, section 4102 .051 of the Texas Insurance Code has required individuals to be licensed as public adjusters, if they intend to adjust claims on behalf of insureds. Even if you are properly licensed at the time as an adjuster, section 4 102. 158 of the Texas Insurance Code makes it a conflict of interest to adjust a claim on behalf of an insured and make the repairs associated with the claim.

To be clear, it is a violation of the Texas Insurance Code to profit from both adjusting the claim or acting on behalf of the insured and making the repairs. Knowing violations can subject an adjuster to loss of license, disciplinary proceedings and fines or penalties. See Tex. Ins. Code §§ 4102.201-204.

Even knowing their was a written law forbidding it, contractors did not care. Defiantly ignoring the laws, contractors continued on in their pursuit of the falling gold from the skies. The Texas legislature then attempted to strengthen the laws against such practices in July of 2013 by rewriting the law.

A roofing contractor may not act as an adjuster or advertise to adjust claims for any property for which the contractor is providing, or may provide, roofing services, regardless of whether the contractor holds a public adjusters license under this chapter, or not.

What this meant, is that now, in addition to public adjustors, roofing contractors (even if licensed as public adjusters) are subject to loss of license, disciplinary proceedings and possible fines or penalties for violations of the statute. See Tex . Ins. Code§§ 4101.201-203 and 4102 .201-204 .

Immediately, the grandson decided to keep this information to himself and not tell the roofing company of the landside victory, before the case was even heard.

A few months later, after weeks of harassing phone calls and aggravating letters from the contractors, the case was being heard by a judge. Mr. Johnson, now being represented by his grandson and a licensed attorney and part time law professor, showed up to court with high hopes of a victory.

Court is now in session. The law professor immediately jumps to his feet and demands the case be thrown out and asks permission to approach the bench. The judge grants permission and the professor, never saying a word, turns over a copy of the written legislation law to the judge.

The judge spent approximately 30 seconds reading over the law before asking both sides to return to their seats. The contractors attorney began to speak when the judge interrupted him…..This Case Is Dismissed…..The contractor could not believe his ears. They literally had not even had a chance to say one word.

The judge then went on to deal out a harsh tongue lashing to the contractor that lasted approximately 20 minutes. After the spanking, he then awarded Mr. & Mrs. Johnson $5,000 in stress and aggravation to be paid immediately by the roofing company. In addition, the judge demanded the contractor also pay all court costs, from both sides.

At the end of the day, if a contractor does not give a homeowner a written estimate with a clear and total dollar amount to be paid to them upon completion of the work, then the agreement is considered null and void and unenforceable in a Texas court of law. If you or anyone you know is working with a contractor under this type of agreement, you can cancel at any time without reason.

The contractor was not only proven to not be a legitimate contractor, but a middleman company who’s only goal is to take over a homeowners insurance claim, sub-out the work and keep the left over money for themselves. The young man that had originally knocked on the door later admitted to the judge that he knew nothing about installing a roof system or handling insurance claims. He had simply been trained to seek out hail damages, knock on doors and convince homeowners to allow him to handle their insurance claims. He was on his 3rd day of work when all of this happened.

The contractor was then spotted 3 days later in the same neighborhood working under the same contingency agreements.

WHY? Because it’s worth it.

The Johnsons simply represented a very small percentage of homeowners that were able to see that something wasn’t right before it was too late.

Most homeowners continue forward with the agreement without ever realizing they are giving away all of their insurance money to a middleman company. There are huge profits in each hail claim and contractors want it all. It’s worth it to them to loose the occasional homeowner and keep going.

This very thing is happening to homeowners all over the DFW area, every time there is a hail storm.

Legitimate contractors do not rush out to knock on doors after hail storms. Only aggressive sales people working for middleman companies looking to take over your claim.

Mr. & Mrs. Johnson are now life long customers of HonestRoof.com and agreed to let us share their story. We provided them a written estimate the same day they requested it. Installed the roof 2 weeks later and they had $3800 left over out of their claims money, that was theirs to keep, instead of going into the sales persons pocket.